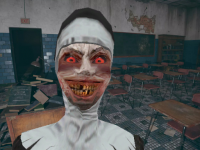 In the terrifying first-person game Evil Nun Schools Out, you must live for five days with a cold-blooded killer in a spooky location. Due to detention, you are in class beyond school hours in a big building filled with rooms, all of which are being watched by a crazed, nasty nun.

Search rooms for valuable items, and try to make it through the entire five-day ordeal without being killed by the awful nun who will suddenly appear.

There are two game modes available in this horror title. The first is the escape mode, when you look for vital supplies and unlock the gates.

The second game is the shooter mode, in which you attempt to amass the crosses while also dispatching the nun with your sacrificial weapons.

Move with the arrow or ASWD keys.