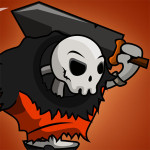 Play Clash of Skulls, an action-packed real-time card and strategy game, where you'll battle a dreadful army of terrible creatures out to conquer your territory.

Set up for war with your army of well-armed skulls, and get ready to annihilate your foes one by one. Get as far into enemy territory as you can by strategically combining the power of your units to make your attacks even more powerful.

You will be supported in your quest for the ultimate victory by archers, warriors with sharp swords, spears, death with his scythe, people carrying a lot of explosives, and many other animals.

To move the army of skulls, use the left mouse button.